The journey he and his wife, Dolores, have walked since they started Light of the Village has been a journey of following Christ in bravery and many small steps of faith. It started with prison ministry, then a calling to go to a dangerous community and put on a Christmas party. Later, they would purchase an old drug house and make it into something new and beautiful–a church. Now people call that same building “the red and white church” or “God’s house and our home.”

It takes a certain bravery to allow God to shape you as you take small steps in uncertainty.

This summer our theme for Summer Bible Camp is Heroes of the Faith. Now, the Bible has some strange, misfit-like characters in its volume of pages. Most of the brave are imperfect, disordered, and unfaithful. But in the midst of their flaws, God calls them to greater things than themselves.

I search verses that have to do with bravery in the Bible, and so many of them refer back to God’s presence in the lives of those who follow him. Whenever God calls for an act of courage, He promises His presence.

Joshua 1:9 says, “Have I not commanded you? Be strong and courageous. Do not be frightened, and do not be dismayed, for the Lord your God is with you wherever you go.” Deuteronomy 31:6 says, “Be strong and courageous. Do not fear or be in dread of them, for it is the Lord your God who goes with you. He will not leave you or forsake you.” Jesus himself gives the great commission and adds, “And Behold I am with you always, to the end of the age” (Matt. 28:20).

In light of these reflections, I think of my own journey with Light of the Village. It started when I first visited Light of the Village one February my freshman year of college. The next step was working a summer camp, and another, and another. The third year I went with Morgan, and other interns, to a new community to launch Camp Faith, our first satellite site located in Chickasaw.

As I drove off, after the last day of camp that year, I left with a feeling that I would certainly be back and a part of what God might be doing in Chickasaw in the future. The next summer they asked me to be the director at Camp Faith, and I was shaking in my boots. I do not particularly like “firsts” (as I call them), and that new step called me to live many firsts that I was not sure I was willing to do.

Yet God calls us to be brave, and his voice is more compelling than any other. It calls us to live in alignment with the most sacrificial and brave act ever–Jesus’ death on the cross.  And somehow, in strange and small flickerings of grace he gives us the courage, through his presence, to take small steps of faith and bravery as we endeavor to follow him.

Now I understand why John says the real success story is himself: because the true success story for any individual is the work God does in our own hearts as we follow Him. 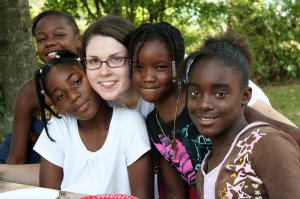 Anna with one of her first groups of girls at LOV Summer Bible Camp. 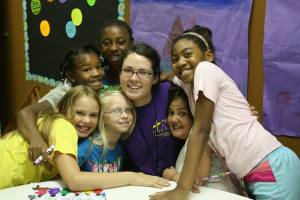 We could not be more thankful for the wonderful partnership we have with First Baptist Chickasaw where Camp Faith meets. Anna recently had the opportunity to help FBCC organize a girls’ purity event and an Easter block party, and she regularly volunteers at Wednesday night children’s church services.

If you are interested in helping Light of the Village equip young people as community leaders and servants of Christ, sponsor a Summer Bible Camp intern for $75/week. Give online here: http://www.lightofthevillage.org/#/you-can-help/give