On Mission in Mexico: Meet Justin

Justin is 16 years old and a junior at Vigor High School. He enjoys making people laugh and hopes to, at some point in his life, be a successful comedian. Justin knows all of the lyrics of almost any Taylor Swift song. It’s real. Try him. He’s not entirely sure what he wants to do after he graduates, but he intends to go to college, most likely in state, and would like to try his hand at theater while he’s there.

Justin loves kids, and they LOVE him. Justin was a TeenLeader at Camp Faith in its inaugural summer, and has won TeenLeader of the Week no less than seven times in his Summer Bible Camp “career” of four years. He likes to think, “Nobody be TeenLeading like I TeenLead!”

Justin was about 10 years old when he started coming to Summer Bible Camp Light of the Village. He admits he didn’t like LOV at first because he felt like he didn’t have enough “freedom”…like every child. But he finished the summer because his step-father wanted him to, then began coming to the after school program and Sunday Bible studies. He says Sunday Bible studies were what hooked him. He liked that John’s Bible studies were easy to understand and that he could ask questions.

Justin is most excited about meeting new people and the plane ride. He says He is super excited that we get to help some people and serve God. He’s a little nervous about not being able to understand the Spanish in Texas and Mexico, but he’s not too worried. He says “body language is always available.”

He is praying that everything goes well and that we make it back safely. He is also praying that through this journey, he will become more grateful for everything he has. Will you pray with him?

To hear more about Justin’s journey to Mexico, join us for our annual banquet Night in the Light on March 5 at 6pm at the Fairgrounds. Seats may be reserved here: http://nightinthelight2015.brownpapertickets.com/ 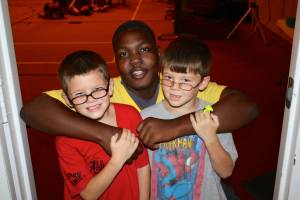 Justin in his first summer working at Camp Faith with two of the boys in his group.