On Mission in Mexico: Meet Dacino

Meet Dacino. Many of you have probably met Dacino at LOV or Night in the Light. After all, he has been hanging around LOV since he was very little… if he was ever little. Dacino is 22 and has been part of LOV since its very beginning in 2001. He participated in Summer Bible Camps and Sunday Bible studies for years, then, in 2007, became one of seven boys in Mrs. Dolores’s first class of the Light of the Village Christian Academy.

When Cino was 16 he started working his first job at Popeye’s Chicken. At age 17, with the help of LOV, he moved into an apartment in Spanish Fort and began working at Premiere Cinema. His lovable personality made him easily promotable and eventually got him recruited away to the entertainment center at Wind Creek where he now works as the entertainment center lead. All along, we should mention that he has been working Summer Bible Camp, helping at the after school program, attending church regularly at LOV, and generally attending every LOV event possible. He probably wouldn’t admit it, but we know he misses us when his work schedule conflicts with LOV programs.

Dacino is unique to our team because he is the only student who has previously traveled to Mexico with us. Dacino accompanied a team of staff and interns to Juarez, Mexico in May of last year. It is because of his response to what he experienced that we decided that other students could benefit from the same opportunity. Dacino says his biggest takeaway from his journey last year was that, though his life has been hard, there are people out there whose struggle is harder than his. He says he learned that he has “nothing to complain about and to be thankful.” So here we are, less than a year later, returning with six more students, expectant that Christ is going to do something truly transformational in their lives in the next week.

Dacino is excited about going back to Mexico to help people. He says, “the first time, I was nervous, but now I know what I’m going into.” And he asks that you pray for his safety and that God would give him the power to show His love.

To hear all about Dacino’s second journey to Mexico, join us for A Night in the Light on March 5 at 6pm at the Fairgrounds! Reserve your seat here: http://nightinthelight2015.brownpapertickets.com/. 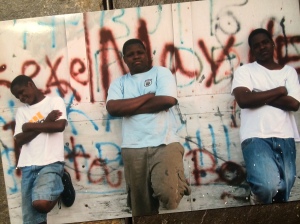 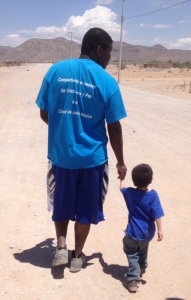 Dacino with a new little friend in Juarez, Mexico in May last year. 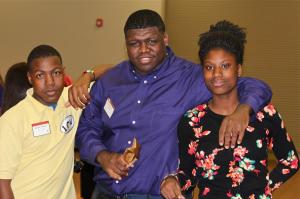 Dacino (center) after being awarded the Shining Light Award at Night in the Light 2013.