On Mission in Mexico: Meet Johnnie

Some of our regulars at the ministry will read the title of this post and think “Who’s Johnnie?” That’s because he is known around LOV as Bingo. If we had to say what Johnnie is known for (other than his dashing good looks of course) it would have to be that he’s always wearing a goofy smile and that he’s one of the easiest people to get along with EVER!

Johnnie is 16 years old and a sophomore at Vigor High School. He and his twin sister, Johnell, are second to youngest of the family of eight children. They have been coming to LOV since they were about five years old, and have been a part of every Summer Bible Camp since. You could almost call Bingo a “founding member” of LOV. 🙂 This past summer Johnnie got to be a part of something very special at LOV. He helped us open a new camp, Camp Hope, in south Prichard. Johnnie was chosen from a pool of around 50 applicants to be among the first group of TeenLeaders to work our third camp. He worked with a group of about 20 boys ages 8-10 every day (not an easy task, mind you), and truly came to develop great relationships with the boys in his group and his college intern, Austin.

His favorite thing to do (at LOV and otherwise) is play basketball.  He typically plays power forward (for all of our basketball fans out there). Bingo has played for the Light of the Village Lions and several city and park leagues over the years, even getting to travel to New Orleans for a tournament last year.

About his upcoming trip to Mexico, he says he is most excited about crossing the border and getting on the plane. And even though “it’s gonna be hard work building that house,” he says he’s “still looking forward to it.” That’s good news, because he’s exactly right; our team has some hard work ahead of them.

He asks that you pray with him that God would use him to help others while he is in Mexico.

To hear all about Johnnie’s journey to Mexico, join us for A Night in the Light on March 5 at 6pm at the Fairgrounds! Reserve your seat here: http://nightinthelight2015.brownpapertickets.com/. 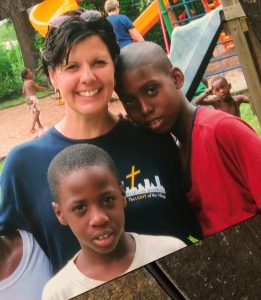 Johnnie (bottom) with Dolores at LOV around age 8. 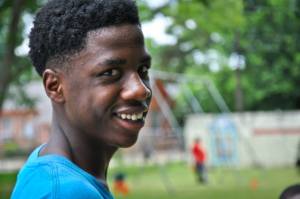